Grateful for Our Urban Harvest

Email ThisBlogThis!Share to TwitterShare to FacebookShare to Pinterest
I've been amazed and grateful for over the last few weeks to witness the huge outpouring of support for neighbors in need following Hurricane Sandy. I have always known New Yorkers to be generous and giving, despite the tough exteriors that we may show. What I've also been reminded of again and again is our flexibility, resilience and persistence. Inspired by Red, Round and Green's call for #SecondHelpings, I wanted to share this story about how small efforts can add up to make a real difference.

On Monday, my daughter's public school held its annual Harvest Day celebration. Originally scheduled for the week Hurricane Sandy hit, it was unclear if the event, themed "Our Urban Harvest," could even be rescheduled. The band couldn't make it, nor could the worm composters from the Brooklyn Botanic Garden. A few of the outdoor art projects also had to be scrapped because it could only be held inside. Would it even be worth it? 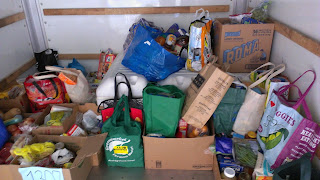 A key component of Harvest Day was a food drive which seemed especially needed in our community this year, so with the backing of the administration, we went ahead with a curtailed day. There were concerns about the hasty re-scheduling. Parents were only given a couple days notice (a backpack flyer on Friday for a Monday event (!)) and there was concern of donor fatigue (this would be week 4 of near-continuous asking for local donations). All those worries were washed away as the food and donations came pouring in that morning in the school yard. There was such a mountain of food, we weren't quite sure how to handle it.

The kids stepped in. Preschoolers and Kindergarteners sorted cans and older children actually put together boxes of balanced meals for the pantry. They were all beaming and filled with pride because it was clear that this urban harvest had a purpose. Their donations were not just being left in a big pile at the schoolyard gate to go some mysterious place; they were being actively organized and sorted to go to a real family's Thanksgiving table.

Parent volunteers drove over 40 meal boxes and many other bags filled with goods to the food pantry. One parent stepped in to rent a truck to bring over the haul, once it was clear that a couple of cars wasn't going to do it!
Once at the pantry, they were welcomed. Another volunteer reported:

We just dropped off the food at the [food pantry] in Sunset Park. The gentleman who received us was so choked up - he said he was so worried because the shelves were bare. They didn't know what they were going to do for Thanksgiving.


Some critical differences that made this food drive a success:

As for the kids, I'm sure they probably missed not having a band or not having any take-home arts and crafts goodies. But they will remember being a small part of something bigger, making a difference by being part of the our urban harvest of generosity.

#Second Helpings
Red, Round and Green's Round -Up
The Lunch Tray's Round-up